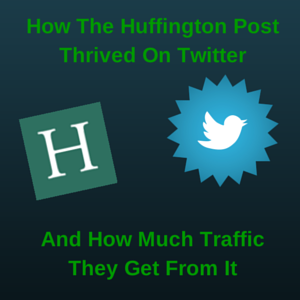 I was fascinated that the Huffington Post has its big audience, tweets every five minutes, and gets dozens of favorites and retweets for each tweet. I looked at the account and concluded that Twitter must be a big part of the Huffington Post’s success.

I decided to do some digging.

Here are the major ways that the Huffington Post gets tens of thousands of daily visitors from Twitter alone: