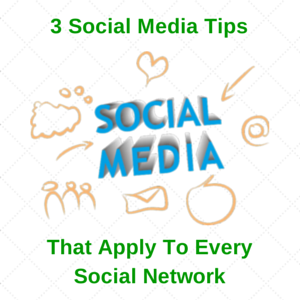 Each social network has its unique set of features. Twitter only permits posts under 140 characters, Facebook has no limit, and on Pinterest and Instagram, you cannot send out a post unless it has a picture. No matter how different one social network is from the other, there are three social media tips that apply to growing a big audience on any social network.

Some people ignore interacting with their audience while other people interact with numerous people on a daily basis. This is one of the few things where there actually seems to be no in between. You need to interact with all of the people who share your tweets to their followers and ask you questions.

In addition to interacting with your audience, it is important to interact with people who are the following:

In other words, this seller was threatening the Daily Dot with a free “service” normally worth $800. That sounds fishy, as buying fake followers should. Here is the Daily Dot’s article about what happened.

You need to post at a consistent rate so people see you often. For a majority of social networks such as Twitter and Facebook, that means sending out dozens of posts every day. I send out about 100 tweets every day, and that does not include when I am thanking someone for sharing one of my blog posts or anything like that.

The more often you post, the more your followers are going to see you. There are some disputes based on the ideal number of times to post. That varies from social network to social network, but based on what is up on the web, you should be posting at least one update on every social network every day with the exclusion of YouTube which should be once every 1-2 weeks.

Social networks are different in many ways, but they all share some similarities. Each time you successfully grow a large social media audience, it becomes easier to grow an audience on your other social media accounts.