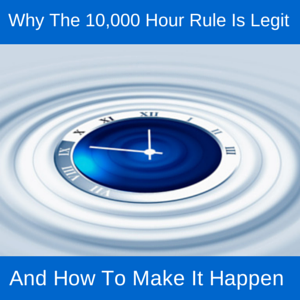 Patience is a virtue for a reason, but unfortunately, patience is also rare to come across. There are many people who are frustrated with where they are and wondering why they are not at where they want to be. They want the vision to be accomplished now, not later.

There were times when I was this person, and I believe it is fair to say that we have all had this kind of experience at some point in our lives. It is the feeling of impatience and a desire to move up. It is the feeling where we realize that putting in an immense amount of work does not result in an overnight change. Instead, these changes are gradual, and I would argue that it takes 10,000 hours to go from unsuccessful to successful in any area.

When I first heard of the rule, I was skeptical. How can we possibly know that it takes 10,000 hours to become successful in any field? Why can’t it just take 5,000 hours instead? Why is it an exact number?

In this journey, it is entirely possible for you to invest 10,000 hours of time into one area, and it is in this area where you will become the established expert of your niche. If you ask numerous professional athletes whether they practiced for 10,000 hours or not, I am sure that most of those athletes would say they have practiced for over 10,000 hours within their lifetimes.

There are many benefits to putting in 10,000 hours of your time into one area. Although some of these benefits are obvious, others are not as obvious.

Including these benefits in an article about the legitimacy of the 10,000 hour rule serves as motivation for everyone who aspires to become a leader of their niche, do something really well, and be known for something remarkable by putting in the time.

Another benefit that exists that some people know about is the ability to raise the bar higher. You can aspire to make double the income you are making within a certain amount of time. Then, you can dream bigger for your next 10,000 hours.

Neil Patel is a successful blogger who has multiple blogs that get hundreds of thousands of monthly visitors. It took his blog Quick Sprout 4 years and 9 months to get 100,000 monthly visitors. For his next blog, KISSMetrics, it took 1 year and 10 months to achieve the same goal. After KISSMetrics was Crazy Egg which reached the same milestone in 1 year and 6 months. The reason why Neil was able to get each blog passed the milestone faster than the previous one was because be knew more about blog traffic each time he started a new blog.

It is easy to imagine that Neil learned a lot about SEO, blogging, social media when he created Quick Sprout. Quick Sprout took the longest to grow because Neil had to start from square one. By the time he created KISSMetrics, Neil already know a lot about blogging.

After KISSMetrics’ success, he learned more information about blogging. This resulted in Crazy Egg quickly reaching 100,000 visitors per month. It got easier for Neil each time just as it will get easier for you to achieve the same goal once you accomplish it the first time.

The 10,000 hour rule is one of the most powerful rules ever invented. This rule emphasizes the need to be patient and put in the time and effort to accomplish your biggest goals. Goals do not get accomplished just by thinking about them.

In the end, it is how you utilize these 10,000 hours that will determine how quickly you become successful as well as how you become successful. Showing up is not good enough. You need to be effective when you show up to get better results. The more you work on your goals, the quicker they will be accomplished.

Putting in 8 hours of work every day (which is possible if you are not in the 9-to-5 status quo) will result in you getting this goal accomplished in a little under three and a half years. These numbers indicate that the more work you put in (as long as it is productive work), the earlier you will be a key player in your industry.