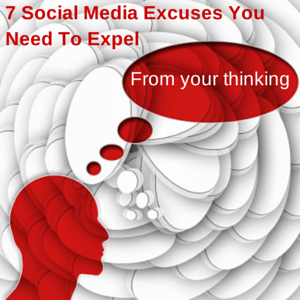 There are many people who have grown large audiences on social media. Some of these people have thousands of people in their audience while others are up there in the millions. However, there are few people who get to see these accounts develop to those stages.

Teen celebrities, fashion stars, and digital marketing experts are three of the many types of people who have dominated social media. They all started out with zero followers, and at one point, the only people who knew about them were family members. You don’t just get born with fame. It takes countless hours of work in order to build that fame and have a large audience.

Despite many people being successful on social media, there are many people who are constantly giving themselves excuses that limit their capabilities. Anyone on the web has the power to become successful and build a powerful presence based on their expertise. This statement is by no means an exaggeration, but if you want to truly be successful on social media, these are the seven excuses that you must expel immediately.

The current popularity any individual has is not final. If no one knows about you, it is still possible to build a large audience. One of the most important things to remember is that everyone started from the ground up.

You may not be what you define as a popular person, but you can become popular. Reading articles like this one show me you have a desire to be successful on social media. Having this desire makes you one step closer to becoming popular on social media.

#2: “Why would a random person want to follow me?”

Some people who create social media accounts tend to think, “Why would a random person want to follow me?” The problem with asking this question is that “random person” is too vague. Vagueness is the main reason why most people get confused about what they need to do on social media.

Once you identify your target audience, follow some of the people in your target audience whose numbers suggest that they would follow you back. As you gain more followers, your confidence will grow, and then you will eventually be asking yourself, “Why wouldn’t someone want to follow me?” Just don’t be a show off.

More people than you would think.

Your targeted audience is the group of people who would like what you have to say. Since there are over 1 billion people using social media, it is almost guaranteed that there are millions of targeted people on the same social network as you. You just need to make the connection happen so that person knows about you and can see your posts.

Social media gives you the power to put your own voice on the web, and you need to be proud of that voice. If you want help with crafting powerful posts, look at what the leaders of your niche are going. The two best ways to learn on social media are by example and experimentation.

This excuse is one of my biggest pet peeves. Not having enough time is another way of saying one of two things:

The people with the big audiences have the same amount of time in a day as you. Everyone has 24 hours in one day, and we all spend a good portion of that time sleeping, eating, and drinking water.

What happens after the necessary activities to keep life going are what make or break success. I find it preposterous that many people complain about not having enough time, and yet the average American watches 32 hours of TV every week. You have more time than you realize. Carving out time from unproductive activities will allow you to find the time you need to grow your social media audience and learn more about building a powerful presence on the web.

#5: I’m not getting results fast enough

Starting your journey towards growing a large social media audience is the equivalent of signing a contract that says, “I understand that there is no such thing as overnight success.” It takes multiple years before a large audience develops. It took me multiple years to come up with an effective Twitter strategy that I currently use to gain hundreds of Twitter followers every day.

No matter which social network you choose, it will not take a few days to go from no audience to 1 million followers. If it were that quick and easy, then there would be no point. There would be nothing special about having a large audience. It does take a while before you grow your large audience. However, it feels extremely good once you have the big audience and realize you built it from the ground up.

#6: “There are too many things I have to learn about social media”

No matter what you pursue in life, there will be a necessary learning curve to cross. Social media is no exception. The reason why there is no overnight success is because it takes time to learn how to be successful, and it takes time to implement the same process at a consistent rate until you get the audience that you want.

#7: It’s too late to jump on the social media bandwagon

Just because social media has been around for a little over a decade does not mean it is too late to jump on the social media bandwagon. Social media makes it possible for anyone to thrive, regardless of when they join.

It is never too late to be successful on social media. There are rising stars on social media that started off with no followers just a few months ago. Now, some of these people have big audiences.

If you can interact with your followers and provide them with value, you can be successful on social media, regardless of when you create an account.

There are over 1 billion people on social media, and it is possible for anyone to become successful on any social network. We often use excuses to get out of putting in the work or because we think a goal is impossible.

Success on social media is attainable for any individual, and there is no overnight success in any niche. However, once you have that large audience, you will be proud of all of the work that you put in to make that big audience possible. Eliminating the excuses is a great way to start on the path towards social media stardom.

Which of these excuses resonated with you the most? Are there any other excuses that you believe hold others back?