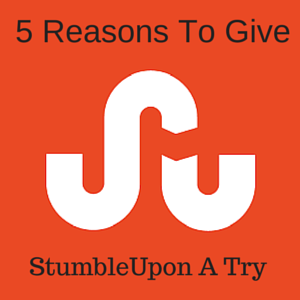 One of the most common reasons people do not give StumbleUpon a try is because of its reputation for a high bounce rate. Many people who visit your blog through StumbleUpon only visit for a few seconds and then move on to the next webpage. However, some marketers have noticed long-term relationships with visitors that come from StumbleUpon. Other than that reason, here are five reasons why you need to give StumbleUpon a try.

You can make the same argument for any social network. The only difference about StumbleUpon is that it is extremely easy for content to go viral there, and old content can go viral too. Some content that was posted on StumbleUpon weeks, months, or even years ago may suddenly become viral. Therefore, if you are posting on StumbleUpon, and the post does not go viral, it is a seed that can grow and become viral later.

On other social networks, the chance of an older post going viral are not as likely. Tweets quickly go out of view on a feed (they get shoved down to the ever-growing bottom of the feed), and within a few weeks, most YouTube videos go from new to old. On StumbleUpon, it does not matter how old the content is. It still has a good chance of going viral.

#2: Posting On StumbleUpon Is Easy

StumbleUpon is by no means a difficult social network to post on. While YouTube requires a good video, all you have to do on StumbleUpon is take the link from any webpage, paste it, put the link under a category, and then write an optional comment. You can send out a few posts on StumbleUpon every day, and as you write more posts, you will have a higher probability of one of your posts going viral.

[tweetthis url=”http://bit.ly/1wb8HUO”]It’s easy to post something on StumbleUpon, and it’s not difficult for posts to go viral.[/tweetthis]

#3: StumbleUpon Is A Different Type Of Community

It is true that we can’t do everything all by ourselves. We need help from other people. Having a StumbleUpon button at the bottom of all of your blog posts gives your readers a chance to help spread the word on StumbleUpon and possibly make your blog post go viral.

StumbleUpon may be different from the other social networks, but it is a social network that bloggers and entrepreneurs alike can no longer afford to overlook. StumbleUpon is a great social network for getting more blog traffic, and this social network makes it easier for your older blog posts to go viral. Even a blog post that was written years ago can still go viral on StumbleUpon and get a lot of attention.

Do you use StumbleUpon? Are you going to create a StumbleUpon account? If so, be sure to follow me on StumbleUpon so we can interact with each other.