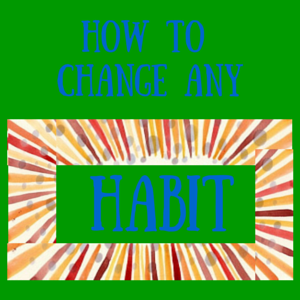 The bad habits are the ones that we want to break such as unproductively or an addiction. Many people try to fight the habits they want to break. Most people just try to eliminate these habits all together, but these people are fighting themselves. You can’t expect to fight the established system, your particular habit, by trying to eliminate it all together. Regardless of whether the habit is good or bad, it is the established system.

If you are unproductive, you can’t fight it by declaring you will be productive. The declaration is a start, but it’s not good enough. Instead of trying to eliminate a habit all together, you need to modify it. Modifying a habit requires knowledge of how habits work.

In The Power Of Habit, Charles Duhigg identifies a habit as a three step process. The first step is the cue. This cue triggers an action to occur. For people who surf their Facebook feeds, seeing the Facebook app or logo is the cue. The cue leads to the routine. The routine is what you do after the cue gets received. The routine in the Facebook app example is to click on the app to get on Facebook. The routine then leads to the reward. The reward in this scenario is surfing Facebook. You may view surfing Facebook as a waste of time, and you may think that reward is the wrong word to use. However, when you are in the moment, it feels like a reward. It feels like a way to kick back and relax. Maybe at the time, surfing Facebook is a way to get out of work or find cool stuff on the web. It may not feel as rewarding when you stop surfing Facebook, but at the moment, it feels rewarding.

These habits and similar ones are the habits that we all want to change. Now that we know how habits are formed, we can change any habit with these three methods:

Many people insist on fighting habits and thinking of the whole process as a battle of epic proportions. However, most people fight habits without knowing how habits are formed. The cue, routine, and reward are the three steps that allow habits to occur. Interfering with any of these three parts of the habit allows you to interfere with the habit as a whole.

I am presenting you with the key to properly changing any habit you come across. You have the power to implement this knowledge into the habits you wish to change. Don’t think of habit changing as a fight of epic proportions. Think of it as a small change. Think of how easier it is to implement small change compared to engaging in a fight of epic proportions. The way we think of things determines how and if we get them accomplished. It takes about 66 days for a change to turn into an effortless habit. You may initially get tempted to return to old ways, but think of a 66 day countdown gradually getting closer to the 66th day. If you return to your old habit, the 66 day countdown resets itself. However, if you stay strong and don’t go back to old ways, you only have to keep it up for 66 days. Then, it will turn into a habit, and keeping it up at that point will become effortless. Changing the cue, routine, or reward to your favor will make the implementation process much easier.