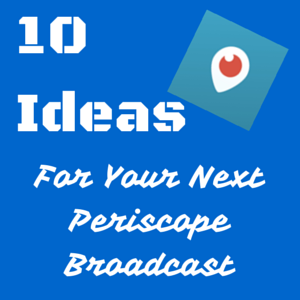 Twitter buys the Periscope app, and now the app is massively popular. After Meerkat dominated for a while, it only made sense for Twitter to become a part of the action. In case you have not heard about the craze, Periscope is a new social network that allows you to broadcast live videos, and people can interact with you in real-time. It is an innovative social network that allows you to effortlessly share a recording with the world in real-time, with your smartphone. Of course, you can do live streaming on YouTube as well, but Periscope is easier for “spur of the moment” live streaming.

While many articles discuss how to use the app, not as many people talked about different ways you can use the app just yet. Using any social network in its infant stages is important because anyone can thrive on a new social network. Some Pinterest superstars with over 1 million followers have a few hundred followers on most of their other social networks. The reason these superstars have so many followers on Pinterest is because they started early. Periscope is only a few weeks old which means there is more than enough time to get up to speed and grow a large audience, regardless of how many followers you have elsewhere. It’s the new shiny object that everyone is active on right now, and you don’t want to miss out.

However, for the beginner, it is difficult to think of different things to broadcast. Many people may struggle to find the difference between a How-To Periscope broadcast and a How-To YouTube video. They both appear to be the same thing. Periscope is completely different and you’ll feel as if your broadcasts are going viral right in front of you. Here are 10 ideas for your next Periscope:

My first legit Periscope was a broadcast of this blog’s draft form as I explained why Periscope is so huge. Many people have started off with similar Periscopes, and I don’t blame them. It’s one of the easiest Periscopes to start with that doesn’t make you look too awkward. The Periscope was definitely better than my first tweet which features a broken link and has nothing to do with my niche.

When I started the broadcast, I talked normally. Most of it was on the fly, and since I couldn’t edit anything out, I simply spoke my mind without pausing the video and editing out any of the clips (which you can’t do in a broadcast anyway, regardless of whether you’re using Periscope or are on CBS live). Then, all of the viewers and likes trickled in. I was extremely shocked and almost panicked (a good type of panic) because seeing people interact, like, and view your post in real-time can at first be a petrifying experience. It is a great feeling to see someone viewing your Periscope and/or liking it every second (and yes, that happened. I had a lean, mean two followers when this happened), but you have to focus on delivering in your broadcast instead of getting distracted by all of the engagement going around you. It’s still really cool to see the engagement in real-time, and I would never give it up.

If you want an audience to stick around and respect you, treating them in a special, VIP manner is a great way to start. What I do now is I offer early access to my upcoming blog posts exclusively to the people on Periscope. I don’t provide the entire blog post word for word, but instead, I include a summary. At the end of the video, I let people know when the blog post will get published and where they can get access to it.

Are you currently writing a book, creating a training course, or working on some other super cool product? It is normal for teasers to show up on YouTube or in blog posts, but why not Periscope. Right now, the community in Periscope is very active, and getting people to like and view your broadcast is very easy. Periscope is the new cool social network, and just as word of mouth spreads Periscope, it is entirely possible for your products to spread via Periscope because people want to show their friends and talk about them. People still talk about Oreo’s dunking in the dark tweet. For years to come, what product teaser will people continue talking about to this day?

[tweetthis url=”http://bit.ly/1JLyBYl”]Periscope is an underrated platform to promote teasers for your upcoming products.[/tweetthis]

#4: You Or A Friend Playing A Sport

When you and/or your friends are playing a sport, put that on Periscope. Whether we get to see some humor from an okay performance or see pure talent, people will view it on Periscope. The main difference between YouTube and Periscope is the real-time capability. MLB records and shows the broadcasts of live games in the big stadiums. You can record and show the broadcasts of live games at the nearby soccer field.

#5: You Participating In Your Hobbies

One of my hobbies is playing video games. I may occasionally use a live broadcast to show the video games I play as well as the gameplay, and since the broadcast is live, I don’t have to hold onto my phone. I can just set it somewhere and start playing my favorite video game, undisturbed. The only difference is the real-time engagement I would get from the Periscope while performing an activity that I would have done anyway.

Letting people see you perform your hobbies is a great way for people to get a better idea of who you are as a person. People want to know your professional side, but they also want to know you on the personal side. This is true for any social network. On Twitter, I mention my accomplishments and my status as an expert, but I also mention that I am a runner and a dog lover. This allows people to strengthen the connection with me because they know me on a more personal level. Including the personal level makes you more approachable, and I can’t tell you how many conversations I’ve had on Twitter over the years that had to do with running or dogs.

Choosing this path has another effect. Some people say that social media completely removes our privacy, and to some extent, these people are right. Moreover, what you post on social media becomes a part of your reputation. If you are on a diet, would you rather show your Periscope followers a live broadcast of you eating food from McDonald’s or healthy fruits and vegetables? If you do a broadcast for every food you ever eat from here on, then imagine how much that could potentially impact your health (again, don’t forget the shout out if you go viral for this).

[tweetthis url=”http://bit.ly/1JLyBYl”]If you use Periscope to live record what you eat, you may end up eating healthier.[/tweetthis]

Every day, I post a Periscope about where I am with my journey as an entrepreneur. I talk about the struggles I faced and the successes. Talking about your journey allows your audience to connect with you on a more personal and professional level while allowing you to assess where you are day by day. In 2015, I started a journal where I wrote my thoughts in that journal for the day before I went to bed. Now, I plan on sticking with the journal but also using Periscope. Your journey can be anything from completing the P90X program to how you’re doing with your career.

Every week, quiz your followers on Periscope and ask them questions. These questions can range from anywhere in your niche to random facts in history. Make sure these are questions that people can guess the right answers to. In other words, you can ask who was the 33rd President of the United States. Unless you are a history buff whose targeted audience consists of history buffs, don’t ask your followers who the second emperor of Ancient Egypt was.

Did one of your Periscope broadcasts do really well? Make a Part Two for that broadcast, and then a Part Three. If people like a movie the first time, they’ll come back for the sequel. However, just because you create Part Two’s, Part Three’s and Part Four’s doesn’t mean your audience will stick around for all of them. In order to get your audience to stick around, you need to make your Part Two’s, Part Three’s, and Part Four’s attractive. Think along the lines of The Dark Knight. Many people saw the first movie, the second movie, and the third movie because all of them had great plots. You don’t have to spend as much money or put in as much time as the people producing the three Dark Knight movies, but you have to provide an experience that would entice people to come back to your Periscope account.

While writing this blog post, I got caught up on Periscope and decided to publish some broadcasts. Sure, the oops moments of life can form good Periscope broadcasts, but I just thought of that on the fly.

What do you think would be a good idea for a Periscope? After reading the conclusion, don’t forget to sound off in the comments section below.

It all started with Periscope as a trending topic on Twitter. I clicked the link and wondered how people could possibly use the social network differently from YouTube. Then, I decided to use it, and I was amazed with the results. My first legit Periscope got dozens of likes and views in a matter of seconds. I gained dozens of followers after that first Periscope, and I didn’t promote the Periscope anywhere. No tweet, no email list, no pin on Pinterest. There was no promotion involved other than me posting a quick broadcast on Periscope.