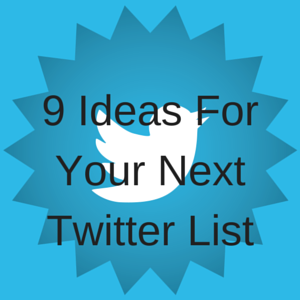 Just a few years ago, many people created Twitter accounts for the first time. Now, Twitter is nine years old and is now the most reliable source for real-time news. Businesses have utilized the platform to make more connections, expand their audiences, and get more sales. Even though Twitter is nine years old, there is still a powerful feature that few people use. This powerful feature has been hidden from most people because it’s something easy to skip over, and not everyone talks about it.

The hidden feature is Twitter lists. Not only are Twitter lists the hidden feature on Twitter, but most of the people who use them only have 1-3 lists. I’m not asking for you to create thousands of Twitter lists, but with well over 200 million monthly active users using the platform, we can do better than 1-3 lists. My recommendation is to have close to 10 specific lists on Twitter so you can find the specific content you are looking for whenever you desire. Creating lists and putting specific users on that list is more effective than using Twitter’s search engine because all of the tweets that appear on your Twitter lists will be from people you know (whether you learned about them online or in real life). In honor of Twitter turning 9 years old last March, these are 9 different lists that you should have on your Twitter account.

If someone you interact with on Twitter shows interest in reading your content or buying one of your products, put that user on your prospects list. That way, you know which individuals you must strengthen your relationship with. This list should be private.

There is no such thing as having too much motivation. The more motivated you are, the more you will get accomplished. Each time you come across a motivational tweeter who you enjoy, put that tweeter on your list. Then, look at the list every day you need motivation. It won’t take long for a good motivational quote to show up.

If you want to get published in the popular newspapers and websites, you need to have a remarkable story, expertise in something, and a journalist who writes for popular newspapers and websites. You can include journalists on your list and then go the extra mile to find their email addresses. Remember, the more concise your message is, the more likely a journalist is to read it and get back to you.

[tweetthis twitter_handles=”@MarcGuberti” url=”http://bit.ly/1CY6qzQ”]The more concise your message is, the more likely a journalist is to get back to you.[/tweetthis]

We all need a good laugh multiple times every day, and what better way to have a laugh than have a Twitter list filled with comedians and funny accounts? Laughing has been known to lower blood pressure, strengthen abs, and improve the immune system. Start reading those funny tweets now.

I understand that many of the facts are irrelevant and random “wow” moments, but some of the facts will be relevant to your niche. Regardless of how many facts you read that are related to your niche or that become useful in the future, you’ll be amazed by some of the facts that get posted. For some reason, I still remember that elephants are the only animals with four knees. Again, this isn’t life changing knowledge for my niche, but it’s something cool to know. My recommendation would be to look at this list once per week.

As you follow more people, your Twitter home feed will get more crowded with other people’s tweets. If you still want to see your friends’ tweets, and you don’t want to use Twitter’s search engines, then fear not. All you have to do is put your friends’ Twitter accounts on a list together. Going to that list will allow you to see a custom feed that only contains your friends’ tweets.

#7: Influencers in your niche

The top people in your niche are the ones who you need to learn more from. No matter how successful you become, you must always learn new things about your niche to provide your customers and followers with a better overall experience. Each time you see an account posting content that applies to your niche, add that account to one of your Twitter lists. Then, after you have enough accounts on this list, you could scroll through the list, click on the links that interest you, and learn more about your niche.

[tweetthis twitter_handles=”@MarcGuberti” url=”http://bit.ly/1CY6qzQ”]No matter how successful you become, your quest for more knowledge about your niche must never end.[/tweetthis]

#8: People who you want to connect with

When you come across someone on Twitter who you want to connect with and build a relationship with, put them on this list. Please note that this is a different list from the list of journalists. These are the types fop people who you want to do joint ventures with, promote each other on social media, or anything else of that nature.

#9: People who you find interesting

With a Twitter list, you can create a custom feed specifically filled with people who you find really interesting. Doing this will make their tweets easier for you to find, and easier for you to get interested by.

Twitter lists allow you to create filtered feeds that only show the users who you want to see. However, if you spend too much time going through your new lists, you won’t have as much time to create products and market them.