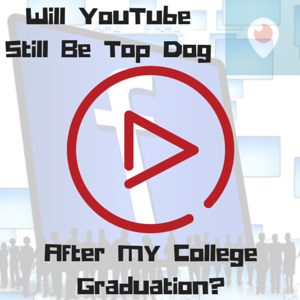 When YouTube made its debut, it was uncontested. If you wanted to upload a video, you went to YouTube. No questions asked. Over 1 billion users later, YouTube is still popular, but unlike in the past, YouTube now faces competition. Vimeo was the first competitor, and YouTube dominated. Twitter’s acquisition of Vine and Instagram’s 15 second videos to compete with Vine provided social media users with new ways to watch and upload videos that had nothing to do with YouTube. Sure, YouTube still thrived after Vine and Instagram, but what about now?

Meerkat and Periscope are now on the scene for real-time videos. Facebook is now an option for people who want to upload their videos to the web. Expect Pinterest to roll something out in the next year or two for video uploads.

I would graduate college in 2020, and a lot has changed on social media ever since high school started (I can only wonder what adults think about the changing world). One of those changes is social networks trying to copy each other while trying to be unique. Facebook now uses hashtags. YouTube now uses cards. Twitter’s update resembled Facebook’s update. More social networks are looking at YouTube’s empire and wondering, “Where are our videos? Why do we have to rely on YouTube?”

If you built your entire presence on YouTube, then you don’t have to worry just yet. YouTube’s saving grace is its age and Google power. It is already known that Google favors YouTube videos in its search engine. Moreover, the most popular videos on the web are on YouTube. If everything remained as is, YouTube would survive for my college graduation. It would still be a cool social network that people would visit for many years to come.

In the last two years, many video-focused social networks came into existence, and well-known social networks provided the option to their users. Vine now has millions of users while Meerkat and Periscope went viral days after they were released (I personally believe Periscope will be the superior of the two). Instagram and Facebook combined have over 1.25 billion users. Again, if everything remained the same, YouTube would definitely survive, but in this day in age, rapid innovations happen fast and often. In 2016, there will probably be another social network based on uploading videos. Twitter and Facebook both own multiple social networks capable of uploading videos without relying on YouTube. These social networks make it easy for users to upload videos via mobile. On YouTube, that’s a little complicated.

It is quite common for teens to migrate from social networks with parents to other social networks with fewer parents. That’s one reason why millions of teens migrated from Facebook to Instagram. YouTube is a place where parents go. My dad watches a YouTube video every day, and there is a zero percent chance that my dad is the only parent who watches at least one YouTube video every day. Teens already migrated to Vine. As Meerkat and Periscope get better, they may go over to those platforms and spend less time on YouTube. Let’s not forget that at one point, MySpace was the largest social network around.

For now, YouTube is safe. However, with innovation constantly on the horizon, YouTube must make changes so it can remain the top dog. YouTube must come up with an easier way for people to record and upload videos through their mobile devices. One of the annoying parts about YouTube is that you have to upload the video through something like iMovie, your computer’s camera, or ScreenFlow, and then upload that video to YouTube. On the latest social networks that specialize in videos, you can record a video right on the social network and then publish the video right form the social network. The entire process saves you a few steps.

YouTube allows live streaming, but the live streaming needs to be easily accessible to any YouTuber. My suggestion would be the ability to create videos within YouTube and a button that allows you to decide whether to do a live stream or not. YouTube needs to change in some way, and in particular, mobile optimization. More people nowadays use their mobile devices than their laptops.

I think the chances of YouTube surviving and thriving after my graduation and beyond are high, but the danger exists. By responding to the danger now while it is still far ahead in the game, YouTube should have a strong future. What are your thoughts on YouTube’ status? Do you believe apps like Meerkat and Periscope are the real deal or fluff? Please share your thoughts below.