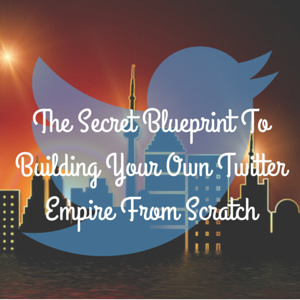 As part of my Twitter Domination course, I decided to run the ultimate case study—creating a new account and going from no followers to over 10,000 followers in a few months. While I am in the middle of the journey and have gained over one thousand followers for my new account, I re-learned the entire Twitter journey. I had the egg avatar, Twitter came up with a list of suggestions for my first tweet, and the number 2,000 took on a whole new meaning.

I also decided to pay more attention to a Twitter account that I almost left behind. The account I almost left behind is @Tips4Tweeting, and after some difficulty, I finally got it passed the 2,000 Twitter follower barrier. Combined with my knowledge as a Twitter expert with over 225,000 followers across all of my accounts and me remembering what it feels like to start from scratch, I came up with a blueprint you need to build your own Twitter empire from scratch:

When I created my new Twitter account for the first time, I had to do something about the egg avatar, the blue header, and the fact that I had no followers and no tweets. The first thing I did was polish up the account so it would look nice. I created a picture of the avatar on Canva and used one of Canva’s Twitter header images. Then, I sent some tweets related to the account’s mission (I can’t tell you what the account is since the experiment isn’t over. I made a promise to the people in my Twitter Domination course that they were the only ones who could know what the account is and I wouldn’t promote it to my audience).

If you want to save a lot of time with your social media strategy, I highly recommend HootSuite Pro. HootSuite Pro is a great tool for Twitter users and other social media users because it connects all of the social networks nicely. One of the key differences between HootSuite Pro and the free version is the bulk scheduler which allows me to schedule tweets in bulk. I can schedule four days of tweets in just five minutes, and since I don’t have to spend so much time writing new tweets, I can go straight to promoting the account.

The first thing I did with my new account was follow as many targeted people as possible, and since the account was new, the ratio didn’t matter. At one point, I was following over 1,000 people and had less than 200 followers. Of course, the ratio matters at some point, so as I approached the 2,000 marker, I unfollowed people who were not following back. I knew I wasn’t building an account that would get 100,000 followers by only following 10 people. Just as with my main account, I knew I would have to follow people to easily achieve my goal.

However, simply having conversations to get out of the loophole won’t do you any good. All of the conversations I started with my new account were relevant. It was the equivalent of me using my main account and commenting on another digital marketing expert’s content in 140 characters or less. Even if the person doesn’t respond to you, you had a conversation, and having conversations with influential people in your niche will lead to more exposure. You won’t get a life changing number of followers by tweeting to influencers, but it will be a start.

Getting The Ratio Closer To 1-To-1 The Right Way

Although the ratio doesn’t matter when you first create your account and follow other people, it will matter for your account’s long-term success. You want to have a ratio as close to 1-to-1 as possible, and preferably, with you having a slight edge (i.e. following 4,500 people and having 5,000 followers). When you go on your following spree, your ratio will go out of whack.

The way you make your ratio normal again is by unfollowing the people who didn’t follow you back. However, you don’t immediately unfollow someone a few days later because that raises red flags, and Twitter may suspend your account. I use Tweepi to unfollow people, and the tool allows me to unfollow anyone who has not followed me back within seven days. The best part about Tweepi is that Twitter recently contacted them and asked them to make some small changes to keep accounts on the nice list. Tweepi’s changes are designed to protect your account from getting suspended.

The biggest hurdle that stops people dead in their tracks is that you can’t follow more than 2,000 people unless you have a 1-to-1 ratio. This hurdle prevents me from using some of the tactics I use to my @MarcGuberti account successful on my newer accounts. I believe it the hurdle serves its benefits because without the hurdle, it would be possible for someone to follow 1 million people but only have 100 followers. At that point, having a big Twitter audience would mean nothing, and how can one person possibly read through all of the tweets that come from millions of people? Without enforcing this hurdle early on, Twitter would have become a spam land.

The main focus for us is to jump that hurdle because once that hurdle is jumped, you can follow more than 2,000 people. Twitter then uses a follower to following ratio to limit how many people you can follow, but this ratio is much more lenient than the 2,000 rule.

After Jumping The Hurdle

Once you jump the hurdle, you must follow more people than you were before while paying attention to your ratio. You don’t want your ratio to spiral out of control anymore, but it is okay to follow 100-200 more people than you have followers (i.e. having 2,500 followers and following 2,700 people). You will eventually discover that thousands of people who you are following are not following you back. Gradually unfollowing these users will bring down your ratio.

As your account starts to grow larger, begin to follow hundreds of people per day. I typically follow 950 people with my main account every day, but since the account has a strong ratio, I don’t have to worry about getting out of hand. Once you are at the point where you can follow hundreds of people per day without worrying about your ratio getting away from you, then you are in good shape to dominate Twitter.

The reason Twitter looks difficult to many users is because of the 2,000 rule. This limitation was put in place to fight spam and make Twitter a valuable resource for everyone. The limitation also makes succeeding on Twitter all the more rewarding. Ultimately, people will only continue following you if you continue to tweet valuable content, but you need people to know about your account. You spread the awareness by following targeted individuals and unfollowing the people who don’t follow you back as you approach the hurdle. Once you jump the hurdle, it becomes much easier to build an empire on Twitter.

Which tips resonated with you the most? How large is your Twitter audience? Do you have any additional tips for building a Twitter empire? Please share your thoughts and advice below.