Out of all of the social networks I use, Twitter brings in the most traffic. And many prominent bloggers within my niche have praised Twitter in a similar way.

Twitter just happens to be a great social network for getting more blog traffic. But only if you know how to bring your followers over to your blog.

The way you use Twitter ultimately determines what you get out of it. To get the best out of your Twitter efforts and generate more blog traffic, follow these four tips.

A while ago, Twitter rolled out a new feature that allows people to pin a tweet to the top of their feeds. 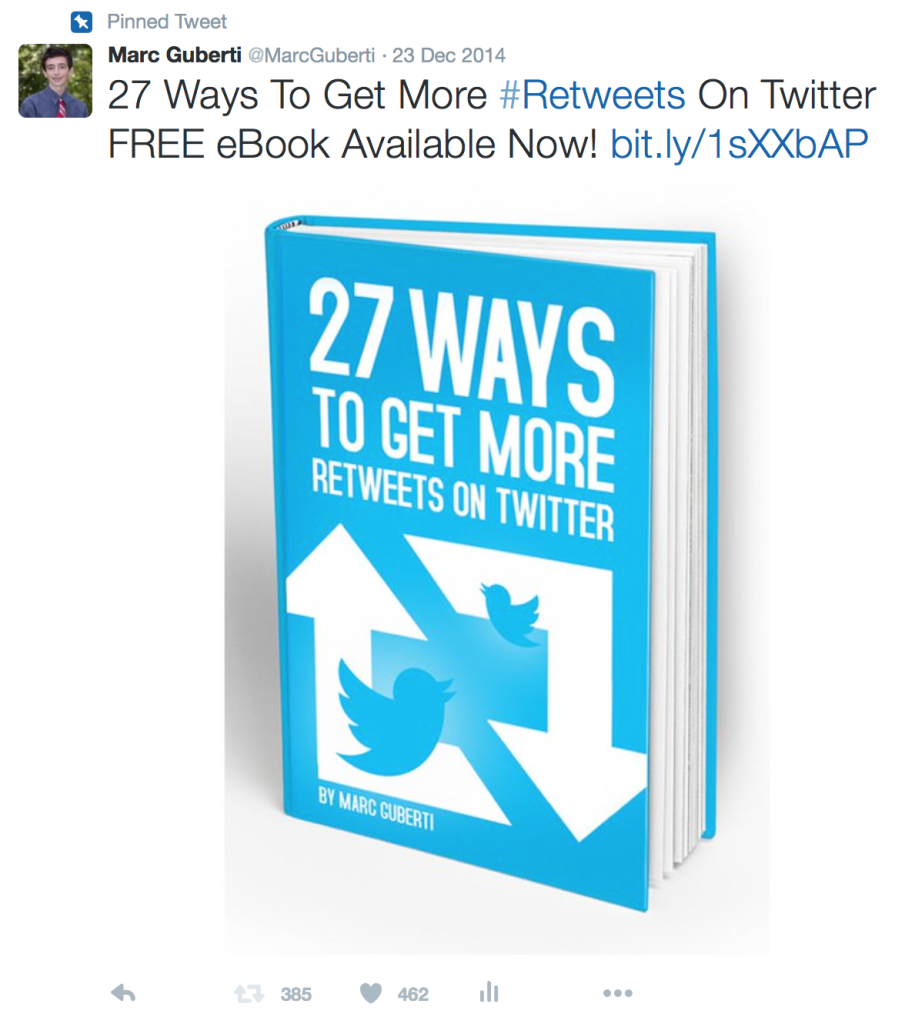 If you want people who visit your Twitter profile to always see a specific blog post or page on your blog, then you can pin one of your tweets. That pinned tweet will also generate massive social proof since it’s half-life is infinite.

The half-life of most tweets are very short. Within a few hours, most tweets become completely irrelevant and pushed to the bottom of our ever growing feeds.

Right now, I am still going strong with the same pinned tweet that has hundreds of likes and retweets. The massive social proof indicates popularity and gets people to click on the link and share it with their audiences.

It’s no wonder that this particular landing page is the most popular thing I have on my blog.

The actual science of tweeting frequency is discovering what works best with your audience. What works best for my audience is tweeting consistently throughout the day.

I started tweeting more often when I saw other people doing the exact same thing and getting better results because of it. I wondered if I could double my daily tweets and then double my blog traffic from Twitter.

It turns out I could, and as a result, my blog grew exponentially over the next few months. 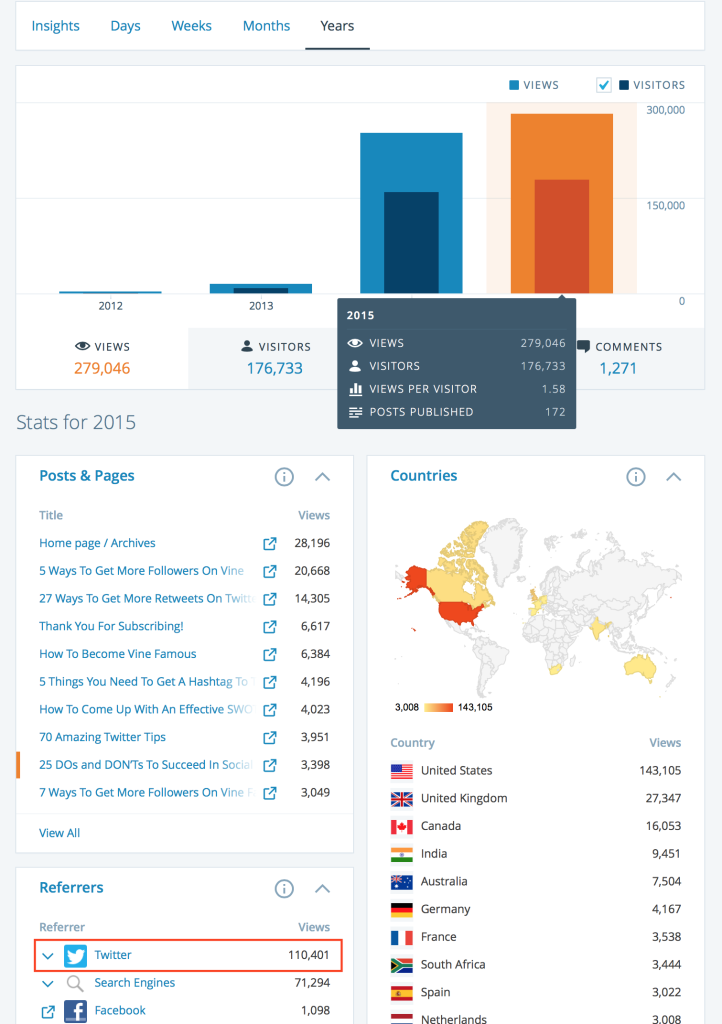 The growth my blog experienced was directly related to my tweeting more often. However, I’m not simply tweeting anything that comes to mind.

I am tweeting my blog posts often. In fact, I tweet about my own blog posts more than 90% of the time. Some people would advise to only tweet your content 20% of the time, but I discovered something different:

Tweets with 1-2 hashtags have been proven to get more engagement than tweets that don’t have any hashtags at all. Getting more engagement from your tweets will result in more blog traffic for you.

And including 1-2 hashtags within a tweet is one of the easiest ways to boost engagement. Not only will you get more engagement, but you will also get more exposure.

I like to view hashtags as the SEO for Twitter. When you type in a hashtag into Twitter’s search engine, all tweets with that hashtag will show up. When someone clicks on a hashtag, that person then sees the most recent tweets containing the hashtag.

Including relevant hashtags within your tweets makes it easy for people to find your tweets. Better yet, if you can take advantage of a trending hashtag and relevantly insert that hashtag into your tweet, then that tweet will pick up some exposure from the trending topics.

Tweets that including trending topics are going to be seen by a significant amount of the Twitter population.

You can have social media icons on the side that drag down so people can share your content at any point. 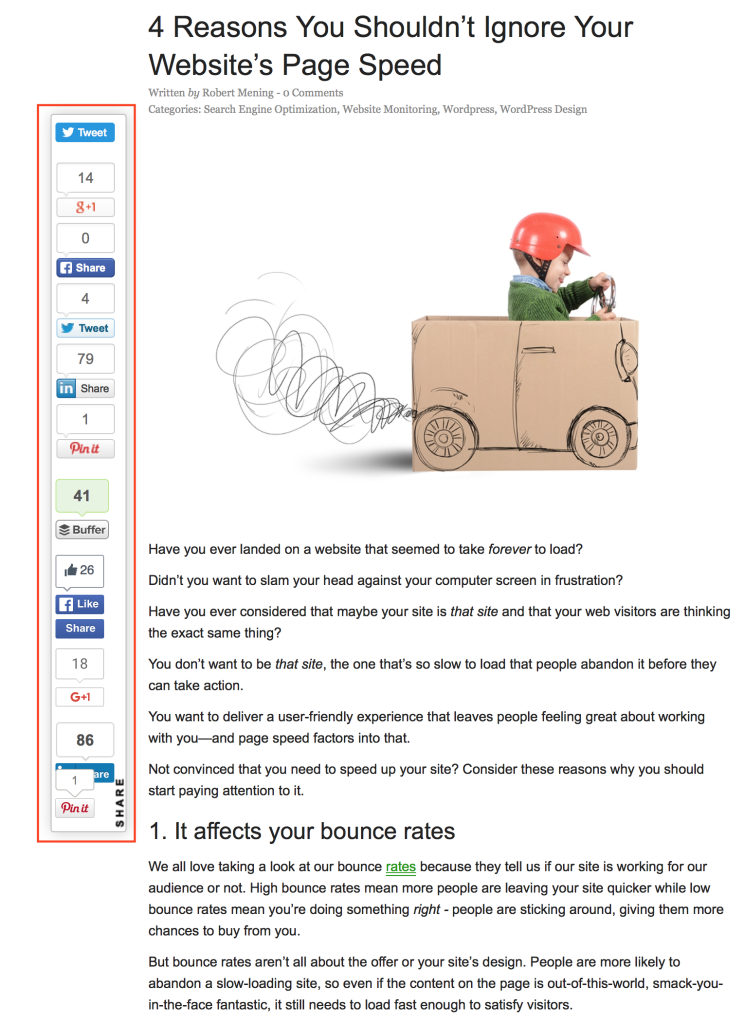 For Twitter in particular, you can also use tools like Click To Tweet and various WordPress plugins that allow you to create links to custom tweets in the middle of your blog posts. Here is an example:

As a result, more people utilize these custom tweets.

The best part is that since you can craft the custom tweet in any way you like, you can create a shortened link (less characters get taken up), add hashtags where you believe they are necessary, and track clicks if your shortened link comes with statistics (if you are unsure of which link shortener to use, go with Bit.ly. It’s free and awesome)

Twitter is the best social network for getting more blog traffic. By changing how you engage with your audience and tracking your results, you are bound to get more blog traffic from Twitter.

Just like anything else in life, Twitter Domination is a journey. Dominating the platform requires an investment in your time that may feel difficult in the short-run but will be very rewarding in the long-run.

I decided to outsource parts of my Twitter strategy, and then more time began to open up. Twitter is not the ultimatum to success, but it is one of the most valuable platforms that will aid in your blog’s growth.

What are your thoughts about using Twitter to get more blog traffic? Is Twitter the supreme social network in your strategy or do you believe another social network is more important than Twitter? Which of these tips was your favorite? Sound off in the comments section below.