Maybe you live in Florida where it’s sunny all year long, or maybe this happens to be an evergreen blog post that you may first come across in the summer. But we all know what it means to be frozen from a business standpoint.

Not getting much results, losing control, no revenue to spend on different business tools.

The results you have wanted are within that frozen social media strategy, but you must thaw the ice with the fire of your soul. Here’s how you build up the flame that thaws the ice.

After I mastered Twitter, it became my blog’s most valuable asset. However, I realized I had put too much reliance on one source when, because of a weird glitch, my Twitter account would get compromised every 33 hours.

This went on for over a month, and I would have to wake up early in the morning (at 6 am or earlier) just to check my email and unlock my Twitter account if it got locked.

Sometimes, it would be locked up for hours in which none of my scheduled tweets went through.

I learned that while social media is good, you should never rely on one social network to bring you straight to the finish line. Not only because some glitch may affect your account, but also because social media is constantly changing.

Twitter is considering extending the limit from 140 characters to 10,000 characters. I conducted a Twitter poll and discovered that most users wouldn’t be happy with the change.

Are you happy with the 140 character limit or do you want to see #Twitter10K happen?

Remember when a business page’s posts could reach out to everyone who liked the page? I don’t remember that. I became a player in the social media space too late for that.

Right now, various articles have been published that identify how many people who like a business page can organically see the post.

The number is different depending on which article you read, but typically 1-4% of your Facebook audience will organically see the post.

Maybe your social media strategy is frozen because you have been relying on one social network to make everything happen.

Social networks change, and different people use different platforms. The more distributed your audience is across all of the social networks, the more people are likely to come in contact with your social media posts.

Outsourcing has forever changed the way I do my business work. The simple reason is that I can now give any of my workload to someone else.

I asked myself what I would never outsource even if I could clone myself a hundred times. The list was small. Writing content, engaging with my audience, and creating videos were on the top of the list.

Everything else by definition became a distraction. The social media workload I had put on myself for all of these years was suddenly seen as a distraction.

So I decided to outsource a large percentage of my social media workload—scheduling tweets, growing my Twitter audience, growing my Pinterest audience, and sending out pins were just some of the things that I outsourced.

The result was that I could tap into the entrepreneur’s most valuable resource: TIME.

I suddenly had hours of extra time that allowed me to create more Udemy courses (I can now create a new course every 1-2 weeks) and returning to self-publishing.

Some of that extra time went towards making my social media strategy better.

There are certain tools that always allow you to retain control but still outsource the work. The tool I came across for outsourcing my Twitter growth was ManageFlitter.

I knew how to get 300 followers per day, and I wasn’t getting those same results as consistently when I outsourced my workload to someone else.

ManageFlitter allowed me to regain control through RAM (Remote Account Management) and one of the best filters I have ever seen.

And for those of you curious about the RAM prices in 2016, here they are (I looked everywhere for the current prices, so now that I can always see them, I wanted to provide them in this blog post). 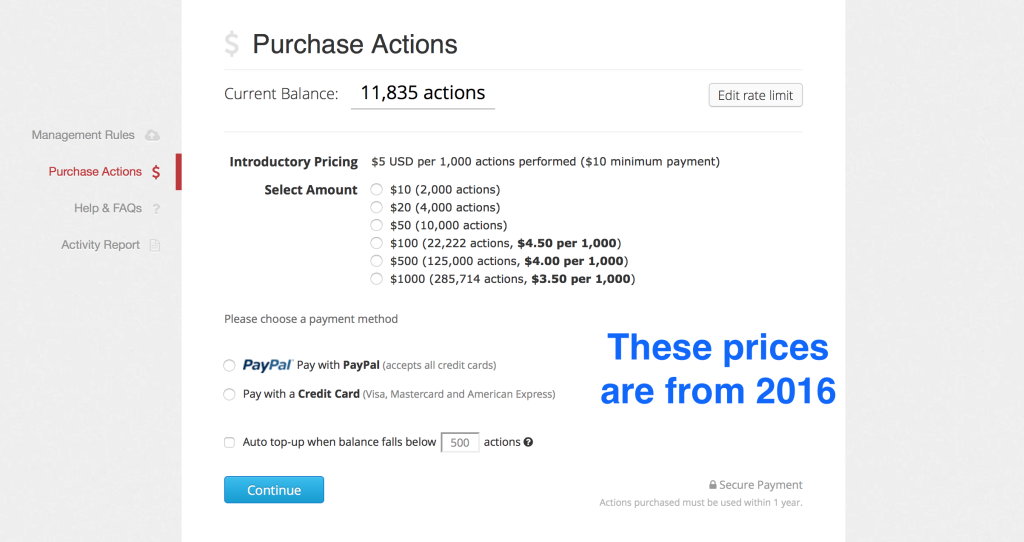 If you don’t feel 100% comfortable with one of your freelancers, then you need to do one or more of the following:

Your social media audience is very important. If you decide to outsource your workload, be sure to keep an eye (especially sharp in the beginning) on the people who you give control to. Make sure they are fulfilling your expectations and doing what you tell them to do.

If any of the work you outsource to other people is time sensitive, hire a back-up freelancer to make sure the job gets done (i.e. scheduling social media posts).

So be cautious about how you spend your money on social media marketing, and when you decide to spend money, never dip in the red.

Now with the warning established, I’ll go more into detail about spending money on your social media strategy.

Right now, I only spend money for two parts of my business: outsourcing and social media. I have gone in detail about the outsourcing already, so I won’t mention it now.

Spending money on social media marketing is where it gets interesting. You need the combination of superior online tools, effective advertising, and a budget.

Let’s start with the superior tools. For Twitter, I use ManageFlitter and HootSuite. Just to have access to those two tools, I pay over $300 every year. The results I get from them are worth the investment, but there is more to these tools than their functionality.

The tools provide motivation, but their functionality is the reason I invest in them. I wouldn’t spend money just for the sake of getting motivated to make more money. Make sure that when you spend your money, it is spent in an effective manner—not for the sake of it getting spent.

As for social media advertising, Facebook is your best bet for getting results at an affordable price. Some people make their entire income from Facebook ads. I haven’t heard as much about Twitter ads. In my opinion, Twitter is better for getting an organic audience and playing without paying a penny.

The social media advertising landscape will continuously change, but right now, Facebook is king in that department.

The way people make money through Facebook advertising is by promoting their posts that lead people to (preferably) landing pages or sales pages. Initially, you should spend some money building your social proof on Facebook with inexpensive likes (depending on the countries you target, you can get Facebook likes at the rate of $0.01 or less per like).

At that point, all you have to do is analyze your results, constantly experiment in a search for better results, and make sure you stay within your budget.

The reason social media strategies freeze up is because results are not obtained, there is a reluctance to taking action, and there is a fear of what will happen.

Social media is the most valuable platform known to mankind. It is the platform where over 1 billion people communicate to each other using tweets, pictures, pins, and posts.

To win on social media, you must stick with it and always find a way. I know that three years ago when I didn’t understand social media, I would have been frustrated about the previous sentence.

During those times, I thought, “JUST SHOW ME!”

But the way you truly win on social media is by sticking with it and always finding a way. Logging in every day and scheduling the posts. You get closer and closer with every day that you take action.