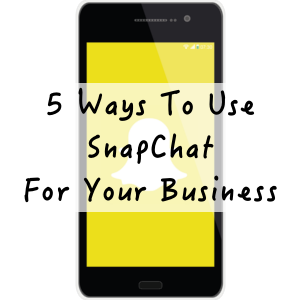 Thinking about using SnapChat for business?

With more than 100 million daily active users and 400 million snaps per day, Snapchat has come a long way. What began as a messaging app quickly became the most popular social network among teens and it’s now a powerful force for global companies trying to connect directly with customers on the platform.

And brands are using Snapchat in creative ways, from teaser campaigns to product launches. Cosmetic company Nars used Snapchat to release a preview of its new collection – individuals had to add NARSissist as a friend on Snapchat to access the preview.

Here are five ways to use Snapchat for your business:

#1: Give Users a Behind-the-Scenes Look Into Your Company

The more people get to know the people behind your business, the more they will trust it. That’s one reason why people include personal information in their bios.

In my Twitter bio, for example, I let people know I’m a Red Sox fan, runner and dog lover. That way I make immediate connections with people who share my passion for the Red Sox, running and dogs.

Snapchat lets you take this information to the next level by providing more context. For example, I can share snaps of my dog or scenes from a Red Sox game.

I know this will sound crazy, but even the clothing you wear gives users a better idea of who you are as an individual. You may wear a suit or collared shirt in your YouTube video, for example, but when you’re using Snapchat throughout the day you will likely capture those moments when you’re still in your sweats or a t-shirt.

You can provide your audience with snaps of your company culture by sharing moments of a team-building exercise, people working on a product, funny moments at the coffee or Xerox machine, practical jokes, staff spotlights, your founder’s work habits, etc.

The result? You’ll connect with people on a personal level.

I really like what John Lee Dumas is doing on SnapChat. He shares what he refers to as “JLD rants” in which he provides his followers with interesting insights.

The great thing about Snapchat is that its bite-sized format is easily digestible. Each snap can expand upon one tip or offer a new one. Or you can combine multiple snaps into stories throughout the day resulting in an ongoing video message.

It’s easier for you, and more useful to your audience, if each snap provides quick insights that can be understood in 10 seconds or less.

These short insights facilitate sharing, keep your audience interested and provide a new level of interaction. Users can also send you 10-second videos, text messages, and pictures via Snapchat.

You can also use the platform to offer access to live events and for crowdsourcing ideas. Your fans will appreciate having a say in your business decisions and will be more motivated to participate. Ask users to come up with a new product name, for example, or provide feedback on a new campaign or promotional idea.

No matter what your niche, users are always looking for inspiration, so make a point of doing something every day to inspire your followers.

It can be something as small as reading one of your favorite motivational quotes. Or it can be as big as creating an ongoing story about your brand, a new product or service, or asking people to share their own experiences with your brand.

You can also offer promo codes or discounts to the fans who watch your entire Snapchat story, or ask them to take a snap while holding your product.

People crave inspiration and something to believe in, and there is always a way to deliver. Tune-in to the daily lives of your followers and try to be there when they need a dose of inspiration.

#5: Communicate With Other Snappers In Your Niche

Right now, top people and brands in your niche are engaging with their followers on Snapchat, even though they may have millions of fans spread across multiple social networks.

Many individuals and brands with millions of Twitter followers are trying to grow their Snapchat following to the first few thousand. Interactions on Snapchat help you target your most valuable ambassadors and build stronger relationships.

The 10-second or fewer formats make people more likely to engage with your snap while already on the platform; people are willing to spend a few seconds engaging with your content. And it is also more likely that you will catch the attention of an influencer.

There is a marketing rule that says it takes between 7-13 touch points to make a sale. A qualified lead is more likely to convert if he or she is exposed to your content 7-13 times.

Here’s how that applies to SnapChat: if you engage with influencers 7-13 times on Snapchat, you’ll build key relationships as they get to know you.

Tip: only recommend one piece of your own content, and only if you truly believe it will benefit the influencer.

As Snapchat continues to gain momentum, it will become just as saturated with advertisers as Facebook and Twitter. Now is the time to get on board.

It’s exciting to think about what Snapchat will look like a year from now. The rule with any social network is that the best time to strike is when the network is new and growing. So don’t waste time!

So if you’re focused only on sending out tweets and optimizing your Facebook ads, you may be missing out on an even bigger opportunity.

Also check out: 10 of the Best Brands on Snapchat Right Now (And Why They’re So Great).

What are your thoughts about using Snapchat for business? Have any tips for growing Snapchat followers? How do you engage with your fans and influencers? Sound off in the comments section below.