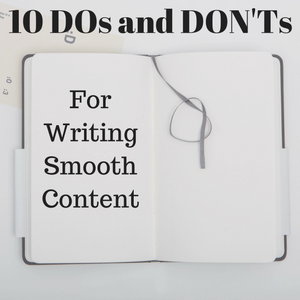 This is a guest contribution from Kate Simpson

As a writer, you are indirectly employed by your target audience. It is not your job to appeal to every viewer/reader you receive, in fact, writers that try to “Please everybody” are typically easier to ignore.

Your job is to give your target audience something they like, something new, and something that challenges them. Here are a few rules that professional content writers live by in order to do just that.

#1: DO Overwrite And Then Cut It Down Later

Write way too much, then go back and cut out the fluff, then make it more concise. This technique is fairly new since computing technology allows people to write far more in a far shorter time. Companies like AssignmentMasters have been doing it for years, where the content is overwritten and then trimmed down so that only the best content is left behind.

#2: DON’T Forget That Habits Are A Friend And Enemy

Form positive habits and you will become a more productive writer. Fail to manage your habits, and negative ones will form. Stephen King writes ten pages every day out of habit. He is so afraid of breaking his habit that he even works on Christmas day. If you do not manage your habits, you will form bad ones, such as overeating, staying up too late, and failing to exercise.

#3: DO Add At Least Two Images To Your Text

People expect them on blogs, and people are starting to expect them on regular websites too. There are even people adding images to their terms and conditions on their website. The online audience has come to expect pictures, and they are ideal if you are selling something because around 65% of viewers retain an image for up to three days later. Plus, adding images may help you lead the eye of the viewer so he or she follows the website narrative that you laid out.

#4: DON’T Rely On Trends To Decide How You Write

This tip is a little unfair because some content relies on trends. For example, if you write about the entertainment industry (any of it), old information is often useless information. After all, are you really interested in what dress Angelina Jolie wore to the 2005 Oscars? Are you really hungry for a review of Prometheus (it’s terrible)?

Content based on trend has a very short use-life, and some writers are looking for more than a quick web traffic spike rather than a slow-burn trickle of traffic. If you wish to latch onto current trends in your niche, you may use the traffic spikes to build your email newsletter list, so that your efforts have a lasting benefit.

#5: DO Leave Your Article Three Days And Re-Read It

You will find that your proofreading read-through catches more errors three days after writing your piece than it did during your post-writing read-through. You are a poor judge of your own work (and its written quality) because you have formed an emotional attachment to your own work. The buzz phrase for this phenomenon is, “Pride of Authorship.” One of the reasons so many writers have editors and proofreaders is because such people have no emotional investment in the work, which makes it easier for them to spot its flaws and errors.

Is there a difference between fluff and style when it comes to adding fluff? Is all insertion of style a form of fluff? Should we all write like robots? Many people are concerned that their writing is all about style and less about content, which means that fluff is a tricky issue.

The previous paragraph was almost all fluff. It added neither useful information or entertainment value. Style is only applicable when/if it makes reading the article easier, more entertaining or more worthwhile. Look back on every paragraph you have written and ask if it could be omitted or summed up in one sentence. The fluffy paragraph above could have been rewritten as, “Do not write like a robot, add a little personality and style without being fluffy.”

#7: DO Write Specifically For Your Target Audience

This means alienating some people so you avoid alienating your core consumer. If you are writing about media studies, you should use terms such as structuring, framing and fourth-wall breaking, even if it seems a little esoteric. If you are talking about comic book movies, you should be throwing references that only movie lovers will understand, such as, “The Iron Man 3 rug pull with the Mandarin was as welcome as the true-love subplot in Hancock.”

Avoid alienating your core consumer. For example, if you are writing about gaming, you shouldn’t be writing about anything with an “ism” or it will alienate your core consumer. Gamers typically do not want to read the word, “Racism” in a Resident Evil 5 review, or “Sexism” in a Deadpool game review. Woman’s weekly magazine readers may like to read about how Link from Zelda has struck a blow for “Feminism,” but that is not typically what gamers want to read.

#8: DON’T Listen To “All” Of Your Commenters

Remember that your commenters do not speak for your silent majority. Your subscribers, page views and repeat visitors speak for your silent majority. Remember that your content “HAS to be disliked” by some people if you are targeting others, which means some comments are very unhelpful. Just look at the work of great writers such as Napoleon Hill, Stephen King, Quentin Tarantino and Guillermo Del Toro. There are groups that love them with all their hearts and others that hate them with a passion.

On the other hand, some users will lodge genuine complaints via your comment section, especially if you change something and your hardcore fans don’t like it. Be careful which comments you take in and which you ignore.

#9: DO Address Your Audience Personally

Use “You” instead of “One.” Your job is NOT to show off your writing skills, it is to appeal directly to your target audience. Writers are not like artists, since artists create work and then ask people to love it. Writers find what people love and then create.

Leave “One” for academic and poetic pieces. If you are a blogger, then use “I” because your blog is a personal statement from yourself. If you are professional article writer, use “you” and never reference yourself because content in the first person tends to sell for far less.

Trying new things is tricky because you risk alienating your core target audience, and people tend to be very resistant to change. Think of all the times Facebook has changed, and think of all the times you have heard people say they do not like the changes and they are never using Facebook again, yet those same people are still using it today. Trying new things is the only way you will evolve as a writer, but you also risk turning away your loyal readers. If given the choice, try different styles and different topics when you are writing for other people (such as when you are guest posting).

If you become a full-time writer, you are going to undergo several psychological changes as time goes on. Writing is a very solitary job where you are alone with your thoughts for a large portion of the day. Psychologist Timothy Wilson of the University of Virginia and Gilbert Quoidbach of the National Fund for Scientific Research in Belgium have proved that we change perpetually change on a psychological level. You need to appreciate that writing will change you in negative and positive ways. You can use this to your advantage if you repeatedly find new ways of improving your written quality and writing process, such as by reading advice articles like this one. 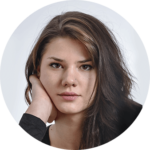 Kate Simpson is the talented head of the editing team at the Assignment Masters. Alongside her vital editing duties, Kate also contributes her own insights as a writer of AM news columns.