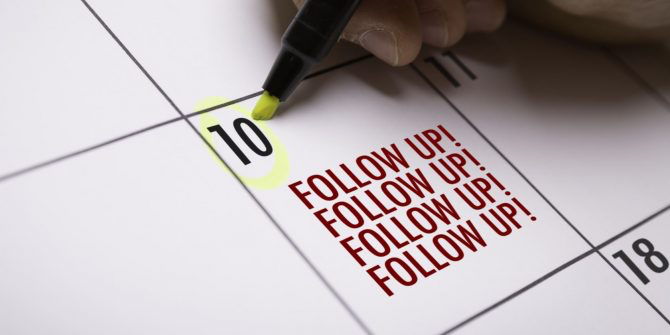 The follow-up…a wicked creature that puts our memory and prioritization skills to the ultimate test.

Not now, but later…and a very specific later.

Mess up or forget, and you might not get a second chance.

Dig through your inbox like a junk draw, and you might find a follow-up request from one year ago. Ugh!

Following up with people at the right time is an essential skill to master. It leaves a solid impression that can open the door to more opportunities.

With that in mind, here are three ways that you can ensure that you’ll follow-up with anyone who asks you to follow up with them.

#1: Set A Reminder On Your Smartphone

If you’re like most people, you spend more time with your smartphone in your pocket or in the same room than time sleeping in your bed.

We’ve become attached to our smartphones, and we can use that to our advantage.

Each smartphone comes with a few apps. One of those apps is the reminder app.

This is by far the best tactic of the three, but this isn’t the only one you should utilize.

#2: Get Active On Their Social Media

Grant Cardone knows who I am. Why is that? I’ve been trying to get him on Breakthrough Success since Summer 2017.

I had a brief email conversation with Grant and some back-and-forth with his assistants. I’ve been setting reminders on my iPhone to ensure I reach out to the right people at the right time (this is still in progress).

But someone like Grant Cardone gets so much interaction each day that it’s hard to keep up. We’re talking about a guy who gets over 100,000 views for his IG TV video 5 hours after he publishes it… 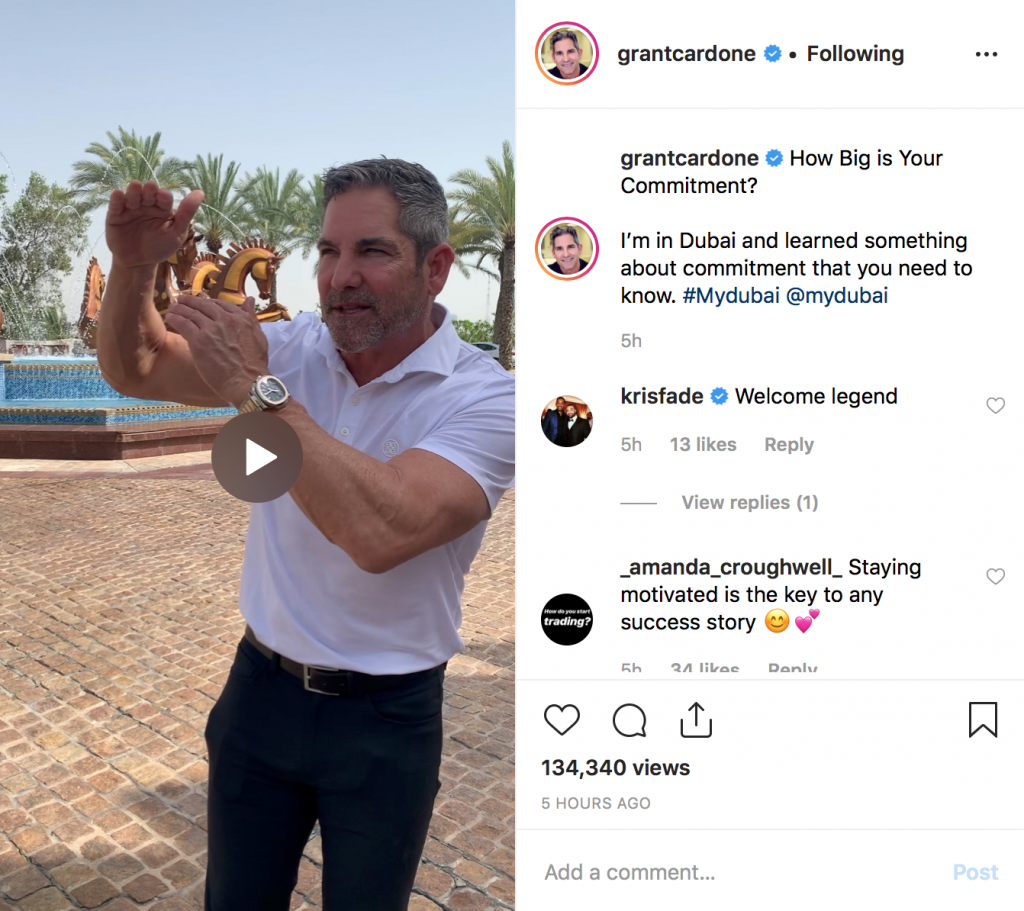 And that’s just one post. We’re not even talking about other social networks or his inbox. Think about how many people are reaching out to Grant and requesting an interview or something else.

It would probably take more than a day for him to read every email or comment he receives today. And people like Grant also get super busy with new products and opportunities.

I bring this up because these kinds of people are some of the people who may ask you to follow-up. If you set your reminder and reach out 6 months later as told, it’s going to feel like a re-introduction for the other person.

To mitigate this effect, I go on social media and engage with their content.

I like and comment on many of Grant’s posts. He’s liked some of my comments and even replied to some of them. Sadly, I couldn’t find a screenshot of these exchanges, but I did find one I had with Lewis Howes…another great person I will have as a guest on Breakthrough Success someday. 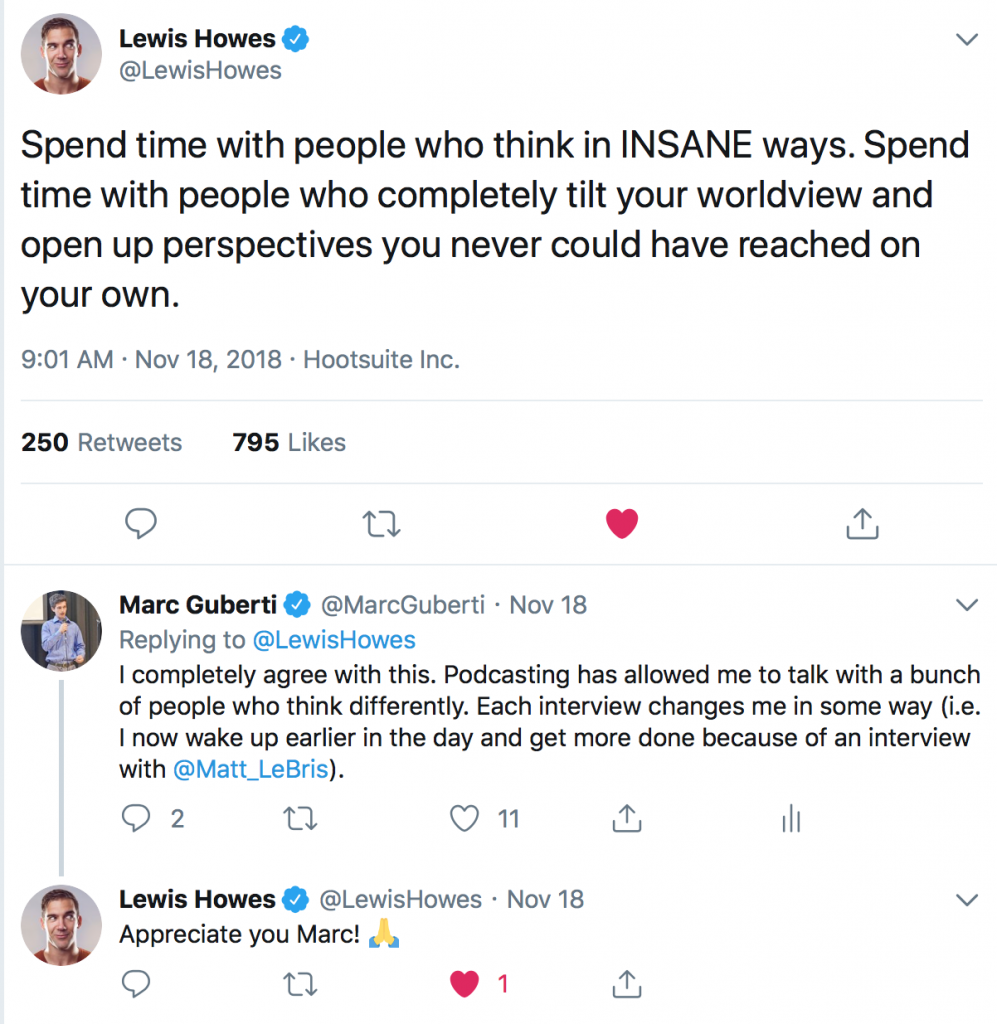 I bring this up because if you engage with people on social media, they remember who you are.

If they remember who you are, the follow-up becomes much easier. When you do follow-up, they know who you are and don’t have to scroll through all of the previous emails to remember (something that few high profile people have the time to do).

#3: Network With People In Their Networks

The easiest way to get on my mom’s good side is if I say you’re a great person, and then when you meet her, you’re still that same great person.

It’s a different dynamic if I reach out and make that kind of a recommendation.

In business, it’s no different. In between now and the follow-up date, you can reach out to people close to the person you’re following up with.

Let’s say you wanted to meet up with Mark Cuban from Shark Tank. If he says, “I’m interested. Let’s follow-up in six months,” you can follow the first two tactics we covered earlier.

However, what if, during those six months, you reach out to all of the other sharks from Shark Tank and they all like you and go on your podcast.

Now you have more leverage with Mark Cuban. You can mention in the follow-up that you’re friends with the other sharks, and they might recommend you to Mr. Cuban.

While this is an unlikely scenario since all of the sharks are super busy working on their businesses and others, it adds meaning to the concept.

A more plausible route would be to build relationships any existing partners, brand ambassadors, assistants, and former employees of the person you’re reaching out to.

Having those people in your network serves as validation. It’s like reaching out to me and saying Seth Godin thinks you’re awesome and you had my brother on your podcast. Seth Godin has been my role model since the very early stages of my entrepreneurial journey.

And if you do something good for my brother first, you’re getting moved up higher on the priority list.

The more you personalize your emails and the relationships you build from now to the follow-up, the more likely you are to get a positive response.

Depending on who you reach out to, it can take time for the relationship to reach new levels. Almost two years later, I haven’t given up on having Grant as a guest on the show.

Our relationship has grown during these two years. It’s just that in between world tours and organizing one of the biggest business events in the country, he has to be careful with how he uses his time–and with all of the engagement he gets, that means turning down some really good opportunities.

What are your thoughts on these follow-up tactics? Do you have any questions for me? Sound off in the comments section below.