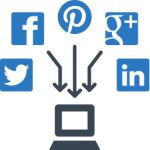 Were you deceived by the misconceptions? Please share your thoughts below.

In the big, complex world of social media, there are now thousands of social media experts. Some social media experts are very popular while others are finding their way. With thousands of people sharing advice on the same topic, there will be perspectives and methods that contradict each other. As a result, some people hear poor advice and end up implementing the wrong methods, or they implement the right methods in the wrong way.

This results in frustration because people are not getting the results they expected to get. Instead of having to guess whether certain methods are good or bad, I am going to provide for you a list of five of the worst social media tips you will ever hear. By knowing the mistakes now, you won’t make them later.

Now that you know the five worst social media tips, you know what you need to avoid. I did not make all five of these mistakes simultaneously, but I have made them all throughout my career. Identifying these mistakes allowed me to go on a better path and get better results for the time I put into social media. What are your thoughts on the list? Do you have any additional mistakes that you would like to mention? Please share your thoughts and advice below.