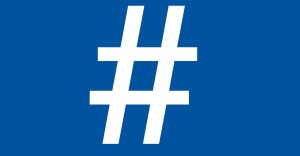 One of the most common questions I get from Twitter newbies is “what is a hashtag?” They appear in numerous tweets, and if you are on the Twitter home page seeing the updates from other people rushing in, it won’t take a while for you to see a tweet with a hashtag.

Hashtags in essence are the SEO for Twitter. All you have to do is put “#” in front of a word, and then you have your own hashtag. When using hashtags, be sure to only use them for keywords. Since my blog is about social media, I tend to use #SocialMedia instead of Social Media in my tweets.

It is important to use hashtags often and for certain keywords. It is better to dominate one popular keyword such as #SocialMedia than it is to have a mediocre presence from 10 hashtags. In addition, you should make it a point to only have 1-2 hashtags in each tweet. Hashtags have been proven to increase the number of retweets a tweet gets, but the more hashtags are in a tweet, the harder it is to read.