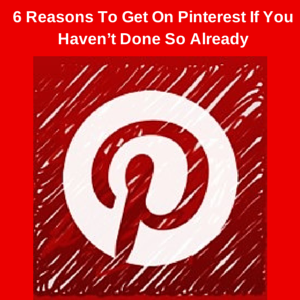 The social network that does not get as much attention is Pinterest. Although it may not be as big as Facebook, Pinterest still has millions of users that are sharing and engaging with content. Pinterest is constructed in a unique style that makes it different from all of the other social networks. Never before has a social media user been able to categorize and present information in the way that pins and boards make possible.

If you are not on the Pinterest bandwagon, then it is time to get on. Many businesses are using Pinterest to interact with millions of people and build strong connections along the way. Pinterest is not another fad. Here are six reasons why you need to get on Pinterest if you are not on it already.

The great thing about Pinterest is that it will continue to grow. There will be a day when Pinterest exceeds 200 million users, then 500 million users, and although this may take a while, 1 billion users. My belief is that if a social network has over 100 million users and continues to grow, it is bound to exceed 1 billion within a decade just like Facebook. Since Pinterest is continuing to grow, it is easier to become an established player on that platform. Some people who have under 1,000 followers on other social networks have over 1 million Pinterest followers. It is a completely different playing field, and since it is still emerging as a top social network, you can make the splash now to boost your chances of becoming popular on it.

On a majority of social networks on the web, content is presented on a user’s feed in chronological order. My most recent tweet will be directly under my pinned tweet, and if you have a few hours to scroll though my profile, you will find my first tweet that over promoted a product link that no longer works (thank goodness it’s at the bottom).

Pinterest is different. While the option to view pins in a chronological order exists, you can also view pins based on categories that a user provides. On my account, I have categories dedicated to Twitter, Facebook, blogging, inspiration, and other topics as well. Those are my boards, and they allow my followers to find specific information.

Some of my followers don’t care about Facebook. Now they no longer have to scroll though information related to Facebook. These followers may only care about Pinterest tips and nothing else. I have an entire board that only contains Pinterest tips. This kind of organization makes it easier for you to present your expertise and for your audience to find exactly what they want.

One of the most common mistakes people make is being way too professional. It seems as if some people are only posting links to articles and sharing their expertise. While it is important to humanize your social networks, Pinterest presents a wonderful way to do that. While it is possible to categorize different aspects of your niche, it is also possible to categorize your interests and hobbies outside of your niche.

I have boards about 3D printing, Legos, bookshelves, and other things that have absolutely nothing to do with my niche. Yet, I continue to pin on these boards because I enjoy those topics. You can be professional and give expert advice, but in order for people to remember you, they need to know you beyond your expertise.

#4: Pinterest can drive a big amount of traffic to your blog

Just like any social network, Pinterest can drive a big amount of traffic to your blog. The only difference is that Pinterest can drive a ton of people to your blog quicker than the average social network. A statistic that I often reference in my blog posts about Pinterest is that 80% of pins are repins. This statistic indicates that people are constantly sharing other people’s content.

If you are constantly pinning your blog posts, some of your followers may constantly repin those pins. Getting enough repins starts a snowball effect in which numerous people from different audiences start to repin your pins. Then, their audiences see those repins and share them. The snowball effect continues.

On Twitter, only 1% of tweets are retweets which is why the average tweet is not shared as often as the average pin.

When Pinterest was new, you could not pin anything without being on Pinterest’s website. Scheduling pins and getting statistics were also practically impossible to do at a fair price. The tools that are available for Twitter were not available for Pinterest.

However, Pinterest is now getting easier to use. More blog posts have the “Pin It” button at the bottom of every blog post. Others have incorporated a “Pin It” button that shows up when a visitors drags his mouse onto a picture in your blog post or any picture on the blog.

Not only have plugins and blogging services caught up, but Pinterest caught up as well. You can now send a pin without being on Pinterest. You just need to have the “Pin It” bookmark installed on your web browser. If you are not using this bookmark, you can get it here. You can also see how your blog is doing with Pinterest analytics. Track how many repins, clicks, and other engagement statistics your blog gets on Pinterest. You can also track other cool statistics such as how many daily views your Pinterest account gets.

Scheduling pins has been made easier by ViralWoot which allows you to schedule up to 100 pins every month at no cost. There are monthly payments that allow you to exceed 100 pins, but having this option available is a game changer. If you only send out three pins every day, you won’t have to worry about exceeding the monthly limit.

It is easy to imagine better Pinterest tools at lower prices (or with no price tags attached) making their way on the web very soon.

Not only is it true that Pinterest holds the title for fastest growing website on the web, but it is also one of the most addictive websites on the entire web. There are many Pinterest users who are on the social network for hours of time, which is more than enough time for people to find your account, follow you, and repin your pins.

Since many people stay on Pinterest for a long period of time, more people will see your pins. Some of the people who see your pins may decide to repin them or click on the pictures to get redirected to another webpage (such as one of your blog posts). Pinterest is where people stay for a long period of time, and that is the exact place where you need to bring your business, blog, and ideas.

Pinterest is a rapidly growing social network. Since it is not as big as Facebook yet, it is easier to grow a big presence on Pinterest and become one of the leaders of your niche. Some of the people who have millions of Pinterest followers only have a few hundred followers on their other social networks.

Moreover, Pinterest is gradually getting easier to use. The “Pin It” bookmark makes it possible to pin without being on Pinterest. It is easy to imagine changes similar to this one being implemented so it is not necessary to be on Pinterest to interact, comment, and pin.

Are you on Pinterest, and if not, do you plan on joining?