Many people make the mistake of focusing on gaining clients instead of focusing on the most important clients. These people believe that they can change every client so that every client becomes a quality client. The problem is that the process takes too much time, and in the end, the client never changes. Ever. Instead of trying to make all of your clients happy, only focus on the clients who are the most important ones you have. Here is why you need to do that.

Those are the five reasons why you need to break up with bad clients as soon as possible. By eliminating the bad clients, you will be able to focus more of your time on your quality clients–the ones who pay on time, make you happy, and enjoy your service. What are your thoughts about breaking up with bad clients?

One of the most underrated but powerful ways to grow your business and get more sales is asking. There is no harm with asking. If you ask a blogger to promote your book, the worst thing that can happen is that the blogger says no. If the blogger says yes, then one more person is promoting your book. Your book gets a backlink and extra sales.

Asking can lead to better business opportunities. Every time someone sends a pitch to reporter’s query on HARO, they are asking if they fit the story. The worst thing that happens is that the reporter rejects the story. The best thing that can happen is that the reporter takes your story, asks you for more information, and then publishes your story. That’s how I got featured on the US News.

One of the people who I interviewed for Lead The Stampede was Dan Nainan, the world-renowned comedian. I knew I would include Dan in Lead The Stampede whether he followed me on Twitter or not, but I decided to ask him if he could follow me on Twitter. I worded my request in the right way (I was not begging), and he ended up following me. Dan has over 400,000 people and he only follows 40 people. I am one of those 40 people only because I decided to ask Dan if he would like to follow me on Twitter.

What are some of the things you can ask? Ask the questions that you are afraid to ask. By asking these kinds of questions, you are showing an interest in what you do and getting the desired result. If you can ask a question in a way that does not look like begging, you can get the result you want many times. 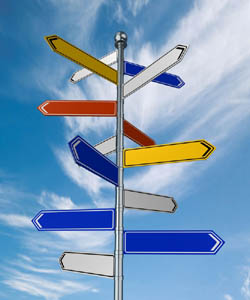 No one is going to choose you just because you are there.

People are only going to choose you if you give them a reason to do so.

If someone were to choose your product or service instead of a competitor, why would they choose you?

The second entrepreneur is more likely to become successful. There are more specialized people that are easier to connect with than ever before. One person offers general advice about social media. There is also someone who specializes in Twitter marketing while there is another person who specializes in getting more engagement from Facebook fans.

Well-rounded is no longer an option. There are countless people offering specialized services. Well-rounded is ordinary. Specialization is extraordinary. The less common choice is to do what you can to make your grass greener than the other side. You do not necessarily have to convert to the other side to have greener grass. Many times, by going to the other side, you will be able to understand what you lost by going to that side. As a result, the grass on the side you left suddenly looks greener. The best thing you can do is work on making your grass greener. There is no reason to accept the rules that everyone else follows.

Don’t go for the greener grass. Make the grass you already have greener.