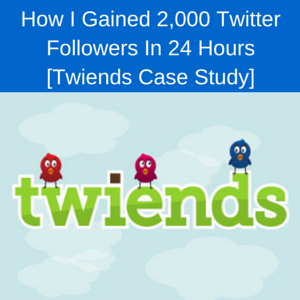 I was gaining a healthy 250-500 followers every day, but just like any Twitter expert, I wanted to explore different ways to grow my account and get more followers. For several years, I have read various articles giving praise to Twiends when users buy the Featured Slots. Tyler Cruz’s case study about Twiends is what really motivated me to take action.

However, I did not take action. That is, until a few months ago.

In December 2014, I was tired of thinking hypothetically and wanted to see what Twiends could actually do for my account. I decided to buy the 24 hour featured slot. Living up to the expectation, my Twitter audience got an extra pinch of growth. By the end of the 24 hour period, I had gained over 2,000 Twitter followers from Twiends, and that was a net gain. Several accounts that followed my account quickly unfollowed me account (some people on Twiends do that just for the seeds. Seeds are part of the point system that Twiends uses to give accounts more exposure), but gaining 2,000 legitimate Twitter followers within a 24 hour time period isn’t so bad.

In the future, I am going to experiment with buying seeds in bulk and let everyone know how that turns out. Chances are, based on the featured slot, it should turn out well. Here are a few things to note from my Tweepi case study:

Tyler’s articles about Twiends are from a few years ago, and he wrote the best case studies for Twiends. Basically, I had no up to date information about how effective the featured slot is. As if the end of 2014, the featured slot is still very effective. You will probably gain close to 2,000 Twitter followers within the same period of time of you buy the featured slot.

Learn how to get over 2,000 real #Twitter followers in less than 24 hours.
Powered By the Tweet This Plugin

#2: When To Get The Featured Slot

In the end, you want more than just a number. It’s great to gain 2,000 Twitter followers, but if none of those followers are targeted, then what’s the point? It is for this one reason why I am hesitant to recommend Twiends to everyone who asks me for Twitter advice. Before I bought the Twiends featured slot, I came to recognize that most of the followers I got from Twiends would be targeted followers.

My thinking process started with me figuring out why people would want to use Twiends in the first place (get more Twitter followers). Many of my tweets contain information related to Twitter such as getting more followers, retweets, and mentions. I even wrote a free eBook about getting more retweets that I promote on my Twitter account. I knew that since Twiends users want more Twitter followers, then I would be the perfect fit.

In his case study, Tyler Cruz said he gained about 200 Twitter followers every day from Twiends alone and showed a screenshot of him having 38,477 seeds. Although those numbers show Twiends can be very helpful if you buy the seeds, buying seeds can add up to a lot of money. Tyler Cruz has spent thousands of dollar on Twiends to buy seeds and featured slots. If you want to spend that type of money to grow your Twitter audience, then you need to be making the money before you spend it.

My recommendation is to not spend more than 5% of the revenue you generate on Twiends. Although Twiends is great at bringing in followers when you buy the seeds, Twitter followers are not the only component to success. You must have a way to turn these Twitter followers into loyal fans, blog subscribers, and eventually customers. 2,000 Twitter followers is not life changing, but if you grow your Twitter audience on top of that 2,000 follower boost, your blog could get hundreds or even thousands of daily visitors from Twitter alone.

If you are eager to give Twiends a try, I highly recommend that you do so. I was eager and wanted to give this a try for a few years, but since it took me a long time to act, all of the excitement stayed bottled up. Then, I decided to buy a Featured Slot and was very excited with the results. My recommendation is to only continue spending money on Twiends at a consistent rate if you are happy with the results and are already making a strong income. 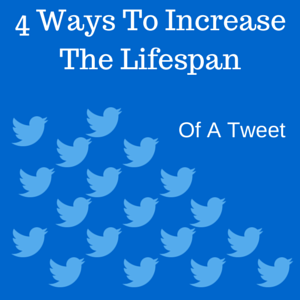 On Twitter’s news feed, it is easy for a tweet to lose importance. Within a few minutes, the tweet that was once on the top of people’s newsfeeds is no longer to be found. The only way to view those types of tweets is to view the person’s profile and scroll down until the tweet gets discovered.

If you are like most people, you are getting swamped with extra work to do, but you want to learn more about growing an audience. Don’t you wish there was a blog post out there that offered quick to read Twitter tips that do not take a lot of time to read but are very effective at the same time? If so, then this is the blog post that you’ve been waiting for.

Implementing these 25 Twitter tips (especially #20) will allow you to grow your presence, boost your engagement, and have a larger audience. Which tip was your favorite?

The problem with any blog is that as more content gets added to them, other content gets completely forgotten about. A tweet can only do so much to bring back attention to older blog posts that got published months ago. There are many blog posts on this blog that were written last year with methods that still work to this day. In fact, some of those blog posts are still popular, but they still don’t appear on the front page. I decided to dig through my blog to find 10 valuable articles that you should give a second look. They contain oodles of knowledge and things to think about. Some are longer than others.

20 Thoughts To Live By

The Problem With Waiting For Something To Happen

What Do You Want To Be Remembered For?

Esurance Won The Ad Bowl By A Landslide. That’s what everyone was raving about when Esurance did its giveaway. The follow-up blog post is “Reanalyzing The Day After The Super Bowl: Was The $1.5 Million Giveaway Worth It?”

What The New York Times, Apple, Twitter, And JetBlue Have In Common

As a bonus article, I present Why Fast Food Restaurants Are Successful.

Which one was your favorite?

By growing your presence on the web, you also grow your presence outside of the web. You will get the recognition and applauses each time you make a public speech. Big numbers have the power to make your presence look bigger than it really is. Your powerful presence come down to the three things on the list. 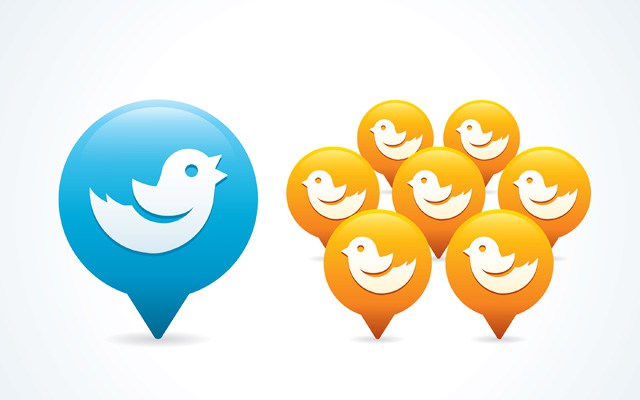 Your searching queries are now over. Instead of spending more time searching for ways to get more followers on Twitter, all you need to do is implement these tactics. No matter how much time you spend searching, there will be a point where you will have to implement what you learned. These are the tips to implement, and if you remain patient while implementing these tips, your following will eventually dramatically increase as the days go by.